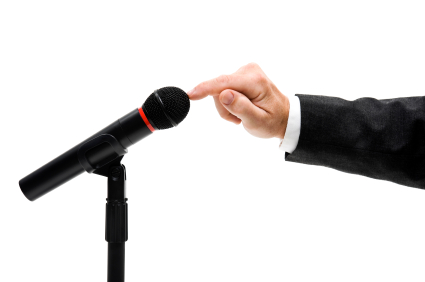 Have you ever been to a presentation in which the presenter struggled with using a microphone?  Maybe their voice faded in and out, or there was background noise, or maybe you were distracted by the presenter’s own discomfort? Here is some helpful tips so that you can avoid some of the mic pitfalls.

As a presenter there are generally three microphone (mic) types that you may encounter: the podium mic, the handheld mic, and the wireless lapel mic (sometimes referred to a lavalier mic).

The least favorable type from an audience engagement perspective is the podium (lectern) mic.  The podium is a visual/physiological barrier between you and your audience and with the mic attached to it, you get “stuck” there. I always avoid standing behind podiums. If I arrive for a speaking engagement and this is the set up, I always ask for other options; most hotels or conference centers can accommodate this if you ask.  However, if there is not a wireless mic available, professional speaking coach and consultant Lisa B. Marshall advises you to adjust the podium mic so that it is about 8-10 inches away from your mouth.  Then whenever you look around the room or glance at your slides, turn your entire body, keeping the mic the same distance from your mouth (you basically pivot your body around the mic).  This is not a natural thing to do but we have all heard what happens when this isn’t done right … the presenter’s voice fades in and out as they speak.  This is distracting for the audience, and gives the impression that the presenter is not experienced, or polished.

I used a handheld mic recently at a large conference but I found it awkward.  With the slide changer remote in one hand and the mic in the other, it is difficult to make any natural gestures.  If you have to use one, Lisa B suggests keeping the handheld mic just below your chin, with it pointed toward your nose so that you speak overtop of it and not directly into it.

The type I prefer is the wireless lapel mic, although this is not without its challenges.  If using this type of mic for a conference presentation the first thing I do is to take off my conference lanyard. In one instance I had my lanyard rubbing on the mic while I moved around the stage, which caused all kinds of odd noises. You can have the same problem if the speaker is wearing a long necklace.  Lisa B. recommends putting the lapel mic about eight inches below your chin, at the center of your body if possible.  Make sure you understand the on/off and mute buttons – these can come in handy.  With this mic the same rule applies about turning your body instead of just your head to avoid the fade in/fade out effect.

And one final point – use your normal tone of voice.  You may feel like you need to speak louder because you are in a large room, but resist the temptation … that is what the mic is for.

If you have never used a mic, make sure you practice with one (or preferably all types) before your presentation. Using a mic can be challenging but knowing a couple simple tips can ensure a professional outcome. Do you have any other tips for using mics, or maybe some horror stories?