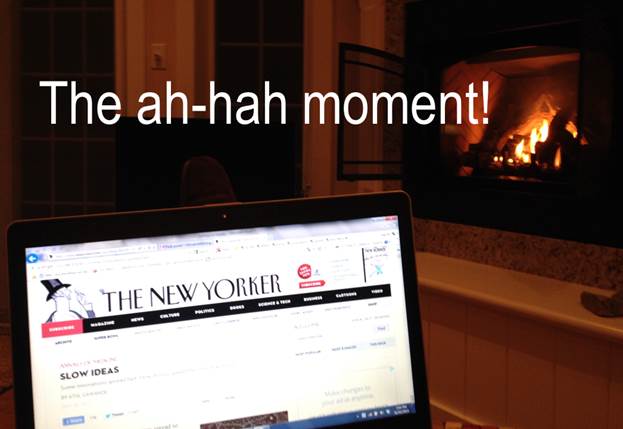 I was at our cottage on the south shore of Nova Scotia; I do a lot of my presentation and other design work there.  Looking for inspiration on a project I was working on, I scrolled through Twitter and followed a link to a link to another link.  And there it was, an article in the New Yorker by Dr. Atul Gawande describing how the medical community adopts new ideas.  SLOW IDEAS – Some innovations spread fast. How do you speed the ones that don’t?

It had no mention of presentations but it was the answer to my mystery.  I had one of those moments of clarity – finally I understood.  Dr. Gawande describes how some breakthrough innovations were rapidly adopted by the medical community, while others took decades to become standard practice. He notes there are two factors which influence the speed of innovation adoption, both of which (to me anyway) explained exactly my people stick to their “Death by PowerPoint” style presentations:

1) How visible is the problem?

Dr. Gawande points out that anesthetic agents in operating rooms became widely used shortly after their discovery in the 1800s.  The problem – patients screaming in agony during surgery – was very visible.  In contrast, the use of antiseptic agents in operating rooms took decades to become standard practice, even though their use dramatically lowered post-operative death rates. The problem of infection was a big one but it happened after, not during, the surgery.  The issue of germs causing infections was not immediately “visible” to the surgeons of the day.

As presenters we have an invisibility problem.  We really don’t see if our presentation has made any impression on the audience. For most presentations we only get one opportunity to make an impact. So I think it makes sense to make the effort to ensure our idea/concept/proposal is understood.

2) How painful is it to implement the innovation?

Dr. Gawande further explains that anesthetic agents were of immediate benefit but obtaining the agent and constructing the inhaler was challenging. Use of early antiseptics was also challenging to implement. It involved a complex process, part of which was spraying carbolic acid onto the surgeon’s hands, which caused burning (literally a painful process to implement).  Both procedures were not easy to implement, so why did one become a standard of practise so much faster than the other?

Anesthetic agents made life better for patients and doctors; they changed surgery from a time-pressured sprint on a screaming patient to a calmer, thoughtful procedure.  Antiseptic technique was only of benefit to the patient and was actually painful for the doctor to implement.

We have to understand that it is going to take some effort (pain) to make sure our presentation makes an impact.  I guess it’s like the old saying “no pain no gain”.

We have to work at changing someone’s actions, opinion or point of view, we just can’t hope that it will happen. But when you do get that change, you have made an impact.  And isn’t that what presentations are all about?